Looking back through some old articles about the sport, I’ve discovered a mention of the first match in The Age on the 16th of June.

Previous histories have put the first match on the 18th of June 1937, two days after this report. Regardless of the date, the winner was Yarraville in both versions, but watch this space while we investigate further to find the true birthday of competitive Trugo.

Given other games in the period were also played on Tuesday, we can probably assume that the first match was on the 15th.

The second is this report of a match between Footscray and Williamstown in 1939.   Apparently it was exhilarating to see veterans lustily smiting the flying discs.  Let’s hope our revival can be just as exhilarating for the local press!

Also from the same paper, unrelated to Trugo, there was relief that bushfire news had pushed the “almost nude women” from the front pages.

“Who amongst decent citizens desires photographs of these dilly show-offs in female beach rig-out served out to them at the breakfast table? Reply: Few, if any.” 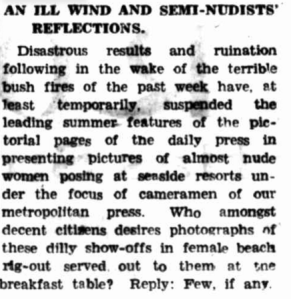 A number of bushfires were happening through the state at the time, including what came to be known as “Black Friday” (Friday, 13th of January 1939), the day before this ran. I doubt it would have made it in the paper had the extent of the tragedy been known.

I hate to end on tragedy so here’s a picture from almost a year earlier in the Newcastle Sun. The original source was the Herald, but it’s interesting that photos of the sport made it to NSW. Claus Ebeling is pictured. He was a founder of the sport and here described as an “enthusiastic knocker”.

At some point we may need social team names… maybe inspiration can be found from these articles and reports? Part 2 of the history of Trugo in Footscray. Click for part 1.

[The] Footscray team played a good game considering the club has only been in existence four weeks and its members have had little opportunity for practice owing to the dampness of the ground, while Yarraville were able to practice on the asphalt of an old tennis course. Very friendly feeling exists between the club. A large number of visitors were also present

The tale told by the Footscray Advertiser after the loss of the first inter-club Trugo match with Yarraville in June 1937.  In the subsequent three years the Footscray club grew to two teams known as Footscray 1 and Footscray 2 in 1940.

Unfortunately, Western Oval couldn’t always be home to the Footscray Trugo club and throughout this time they searched for a base the club could call their own. Initially a site on Hyde St was suggested but when the quote came back for six Trugo rinks (three asphalt, three grass) at £66 – plus labour – it was deemed too costly and the search continued.

A second site was proposed to be on railway land, which would have seen eight Trugo rinks near Footscray station, however after months of back and forth the Victorian Railways commissioners had concerns about the suitability of the site and this plan was also abandoned.

Eventually it was settled that the current site (that we are working to revitalise) on Buckley St was suitable. The site was vacant after the houses on it were acquired by the council and demolished to make way for road works. It was former householder Peter Miller, at the time living on an adjacent street, who suggested the site be used for Trugo.

The cost for this site was to be £81, with an additional £29 to be added if asphalt rinks were to be installed. To help reduce costs, the club proposed a working bee as well as offering to pitch in £20 of their own money. However even though plans were drawn up no action was happening and a year later the club secretary wrote to council with a plea to get things moving again. Football season was looming and the club would lose some access to the oval they currently called home.

Finally in 1940 the club was officially opened, with a new pavilion and grass rinks, on the site where the unused club still stands. Work on the club continued throughout the 40s with an open shelter being built and in 1965, further extension to provide facilities for women.

In part 3 we’ll look at how the club fared, with their new facilities, in the following years. The bulk of the information for this and part 1 has come from this conservation analysis in 2006: http://www.trugo.org.au/documents/FTC_Conservation_Analysis.pdf 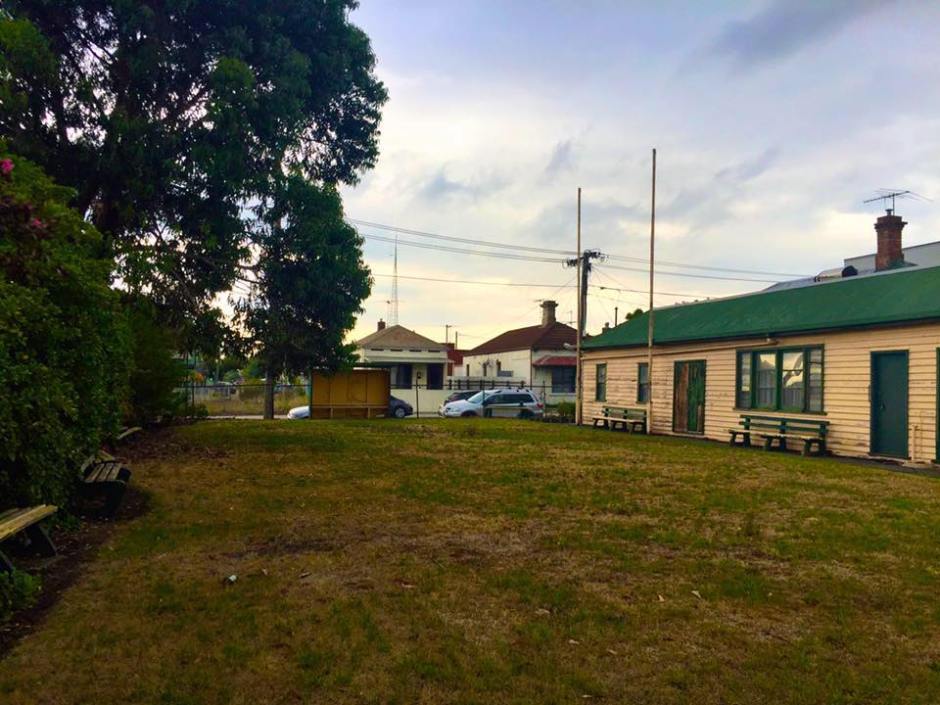 The history of Trugo dates back to the 1920s when railyard workers in Newport began using mallets to hit rubber train buffers between carriages. Legend has it that one chap put up a couple of posts for goals, hit a buffer through and proclaimed “that’s a true-go”.

Although another story is told of Tom Grieves, a railyard worker at Newport, who took some rubber washers home and him and his kids began hitting the washers about the street. As it became a bit of a neighbourhood hit, Tom took the game back to work and it became a popular lunchtime pursuit. In this story, Trugo is derived from his initials.

No matter which version you hear, however, the origin is always in Newport. Making Trugo definitely a sport unique to Melbourne.

Footscray was the second club to form in 1937 only a few weeks after the Yarraville club was formed and granted permission to play in Yarraville Gardens. From the Footscray Advertiser at the time:

Footscray is joining with Yarraville to learn the game and then intend to form a club of their own. It is hoped that other suburbs will follow suit, as the game is a great one for old retired men and keeps them in good fettle.

Good fettle indeed! The only condition at the time was the club members be over 60.

Soon after the formation the club had their official launch at the Western Oval (what we know now as Whitten Oval), and in June of that year the first ever inter-club match between Yarraville and Footscray was held.

While the Footscray team unfortunately lost, it signaled a long era of Trugo in Footscray.

Part 2 will look at how the club found a home.

END_OF_DOCUMENT_TOKEN_TO_BE_REPLACED

Trugo is a sport born in Melbourne’s West in 1920’s Newport Railway Workshops. Using whatever was handy at the time; namely mallets, train carriages and rubber train buffers, the workers invented a sport that survives to this day with clubs in Yarraville (the oldest), Ascot Vale, Brunswick, Port Melbourne, Sandridge and South Melbourne.

Unfortunately you’ll notice I didn’t mention Footscray in that list. That’s because the Footscray club closed down in 2009, and despite being the oldest surviving facilities purpose built for Trugo, it is no longer used or maintained.

Footscray Trugo Club is working to change that.